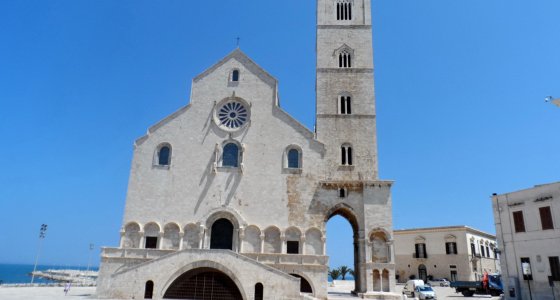 The limestone generally known to the public as the Stone of Trani reveals one of the most important building materials and used in Puglia as in the world, since the early human settlements. The subsoil in the district of Trani is rich in limestone and such material has created over the years the localization of a large industrial agglomeration for both the mining activity and production; configuring one of the most equipped and competitive areas of the entire southern Italy, by deriving the establishment of a pole that gives importance and possibilities of industrial growth in all companies with a strong connection in national as international areas.

The limestone in question extends into the ground in almost the entire northwest of Bari territory until to touch the tips of the Gargano promontory and the plateau of the Murge. The extreme porosity of the material (our entire region is called “thirsty Apulia”) imports the almost total circulation of water only in the deeper layers of groundwater so that lack of water circulation in the surface layer of subsurface gives the possibility to create a cretaceous outcrop.

Various geological studies have detected the presence in these layers of the stone of dolomitic limestone over that of true crystalline dolomite especially in the upper part in association with white calcareous banks of large sizes, where the stratification of calcareous bank happens to allow the extraction of  the stone of Trani, while in some areas of the province and specifically in the area of Contrada Lamadoro the stratification is likely attributable to the Jurassic period. In the same area a material is taken, certainly not suitable to be marketed of merit, but nevertheless for its darker color and the bituminous characteristic, it is prompted on the market especially for skirting boards and flooring. Elsewhere the stratification of the subsoil is very clear with thicknesses ranging from 10 cm to a meter very often with colors ranging from white to off-white, ivory, gray and pale reddish. Finally it can be stated, due to the outcome of a multiplicity of studies and analyzes, the presence of such materials of detrital and oolitic limestone that characterize an environment of coastal facies.

As to the material it is possible to distinguish, in principle, three major varieties, which are different according to hardness and color gradients. One located between Corato and Trani is dun-colored, homogeneous, crystalline but has little demand from the market. The second, much more widespread, is light in color tending to ivory, less compact and is called “living stone” in our jargon. And finally, the third located between Trani and Bisceglie is not very compact, almost tender, whitish in color and rich in fossil remains. So we can say that the variety of stone, which is the most commonly used, is the so-called living stone, extracted in the most popular five locations namely: S. Elena, S. Angelo, Puro, Petrarello and Montericco (all the places are at most 5 km away from Trani).

The quarries, more or less similar, have layers of variable thickness. Sometimes between them you can find small reddish or greenish clay layers followed by large fractures that allow the water to flow underground. In order to distinguish the various layers, names for the different layers (strata) have been adopted over the years, including Bove, Palm of the hand, Taddone, “a quarter to two”, Two pumpkin yields, Massello, Vaccone, etc. In all locations mentioned, hands are repeated almost always with the same sequence, it can happens in some cases that a given layer appears to have a different thickness than the norm. In fact, in the district of Pure the most used layers for their thickness are a quarter to two and the massello, while in the district of Jesus Maria we distinguish the bronzetto, the veined red and the patanoso. The color and appearance of the stone then go to give his name to the product subsequently marketed so as to be able to speak of the chocolate variety, ondagata, pearl, ivory, cerulean blue, bold, etc.

The job of the quarryman has always been a very risky work, especially when the extraction and transport of marble was made with rudimentary tools and with the use of explosives in quarries, while in Trani marble is extracted through underground excavations. People from other caves of the peninsula know the extraction techniques through the removal of mountain walls preventing the restoration of the status quo ante as it does, or it should be, in the quarries of Trani. Currently the extraction occurs naturally outdoors, with the system of straight treads in order to facilitate the extraction also in horizontal direction.  Following, to separate the blocks, iron wedges are grafted with a bat and then leveraging with metal poles or entering other wedges in the cracks of the various strata. Through mechanical means of large flows, we proceed to the transport in the quarry while the transport to the various mills is by truck . In sawmills the extracted blocks are sawn and processed by mechanical looms, single blade or multi-blade, mixture of sand and water. The maximum sizes of the typical stone of Trani are 4.50 m x 1.

Trani stone has found various applications in civil and in complex architectural structures over the years. Through various processes, the stone can be polished , hammered , hammered , brushed, antiqued or finally smoothed for columns, capitals, posts, shelves, floors, curbs, cornices, steps, bolognini, thresholds etc. The material used is a building material, typical of the tranese territory until the Murgia, of the Alta Murgia Park, understood as different tufe from traditional marble for a major and easier work.

The peak time of the extraction of the Stone of Trani can coincide with the period of the Crusades, and in particular with the Fourth Crusade and transit in Trani both of the shroud and of the masons of French origin, and the return from the Holy Land after working of the realization of the Holy Sepulchre and of other sacred monuments in Jerusalem as places of Christianity in the Middle East. This active constructive fervor arrived in the quarrying of Trani and they built the Cathedral of Trani as other historic churches of Trani and the Jewish Synagogue, built with the same stone of Trani.

It’s important to know that the stone of Trani is quoted in documents of 1500 of notarial archives and in sacred works of great artistic importance. Our stone is then used for buildings such as the church of Nazareth in Barletta, the cathedrals of Trani , Bari, Barletta and Bitonto ; also present in the pier of the port of Malta, Alexandria, Port Said, Taranto, Brindisi, Bari, Rhodes Aegean. Over the last 70 years then the stone of Trani has begun to establish itself in the domestic and European market and global level.

Important supplies have been made to achieve the greatest banks: Bank of Italy, Banca Nazionale del Lavoro, for public buildings , the palace of the Apulian aqueduct, the Hotel Nations, for the barracks of the Carabinieri in Naples, for the Bank of Rome, for the Italian Post Office, for the Court of Appeal, for the Provincial administration building, for the palace of State Property in Taranto, for the War Memorial, for the sanatorium, for the Post Office building in Pescara, for the cinema and the hotel Magnin Manzoni in Milan, for Messina railway station, for the Post Office building in Imperia, for Brindisi Sailor Monument, for the Town Hall of Gela, for The Excelsior in Rome, for the Quirinale and many other buildings, both public and private; for the Skyscraper and the Post Office in Foggia, at the Bologna University of Chemistry and Biology, and finally in all the major European capital cities: Paris, Berlin, London and the headquarters of the Apulian Region in Brussels.

More than a century of experience

in the wonderful city of Trani in southern Italy

Processing of limestone extracted directly from our quarries

Ecology is not a detail for us

The company constantly works with a vigilant eye to ecology and care of the environment by committing to comply with the applicable both for the disposal of solid waste and the water used.

Do you need more informations?